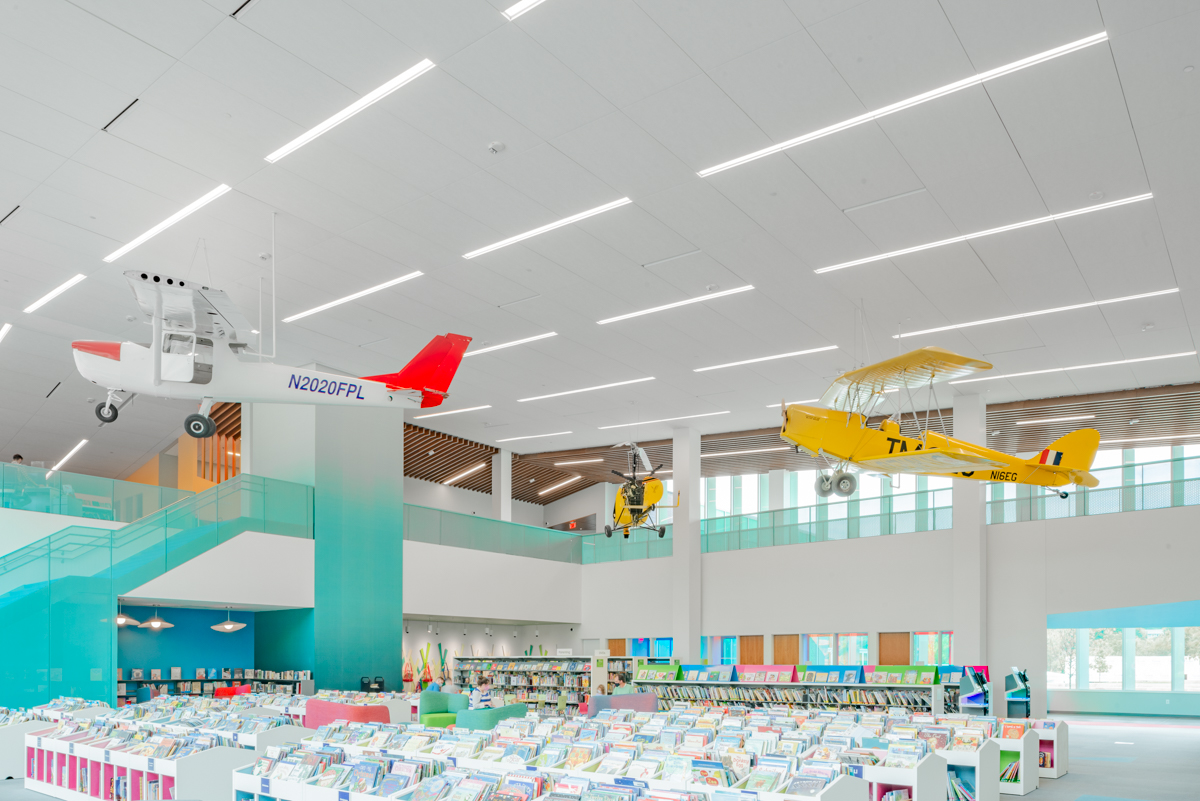 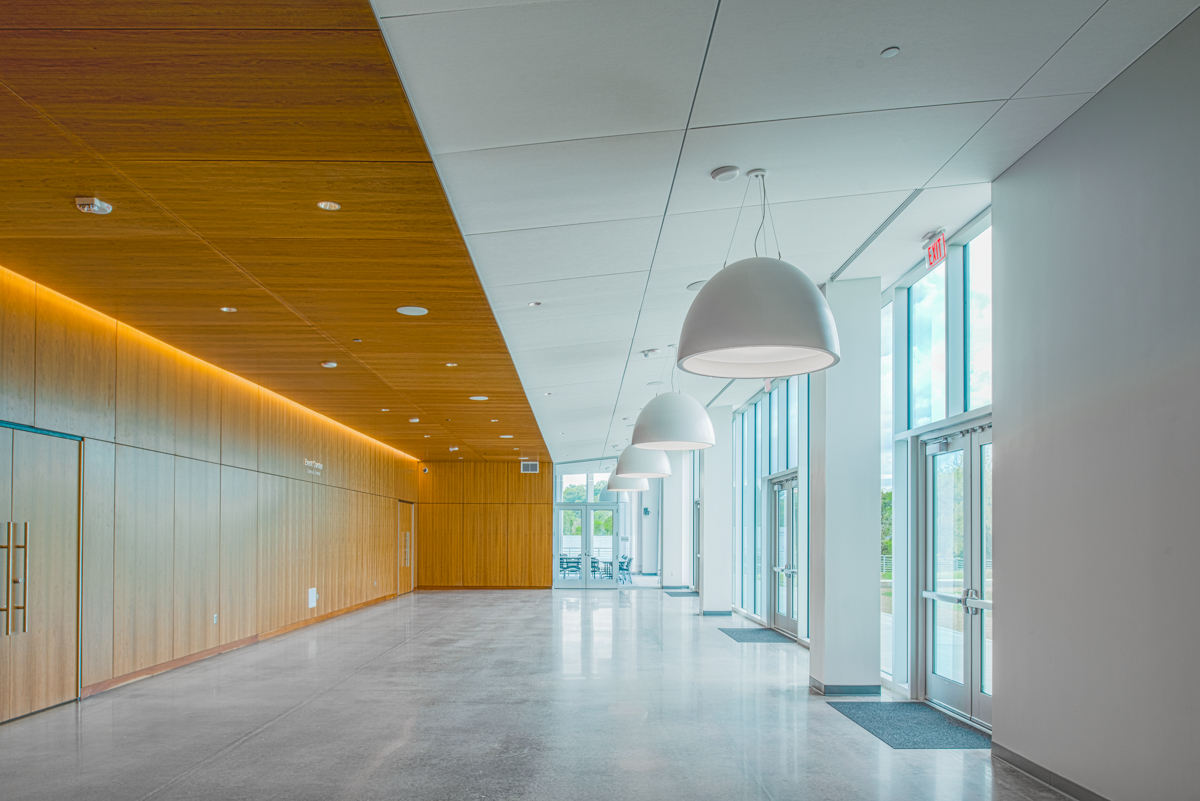 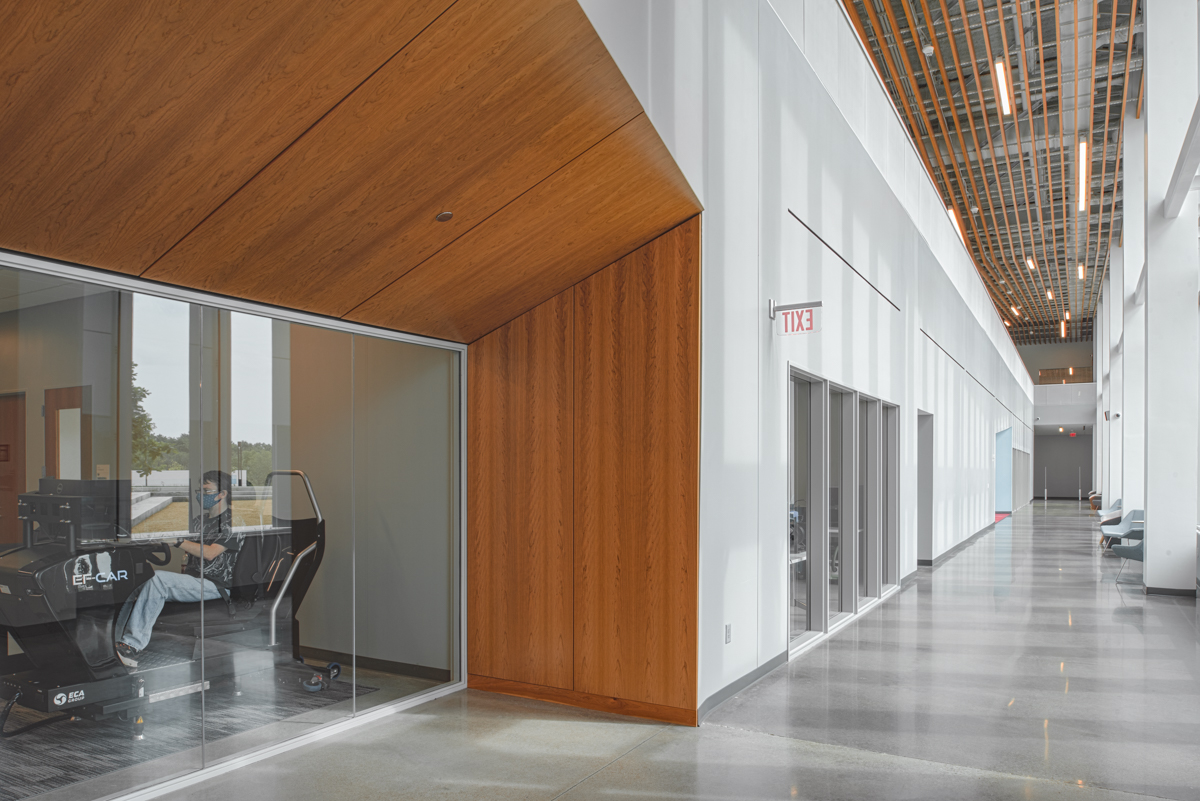 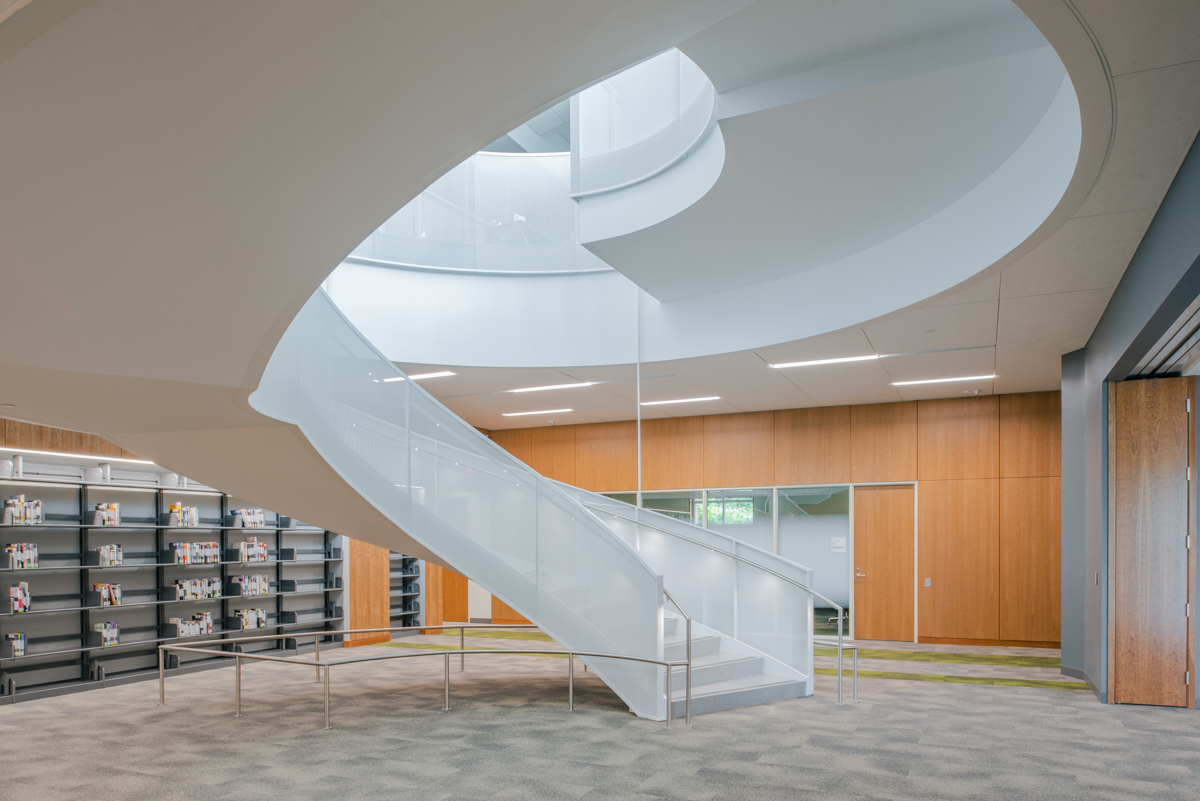 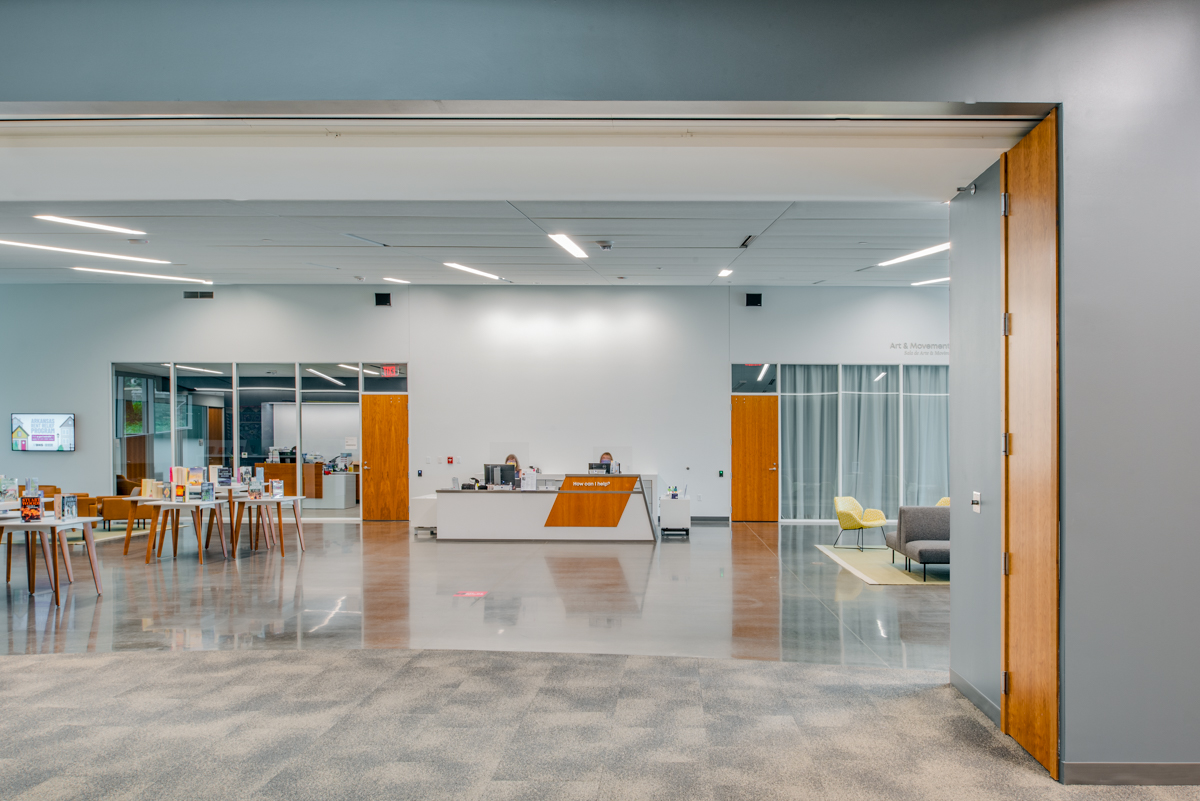 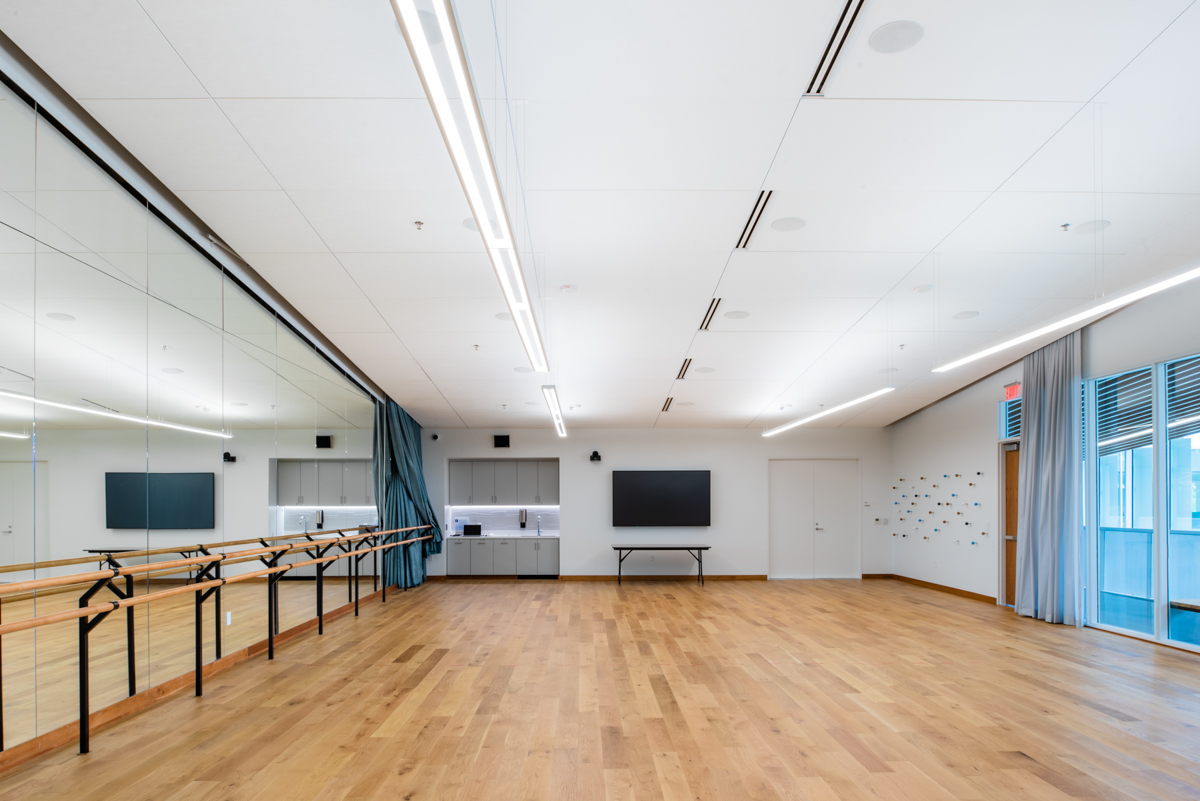 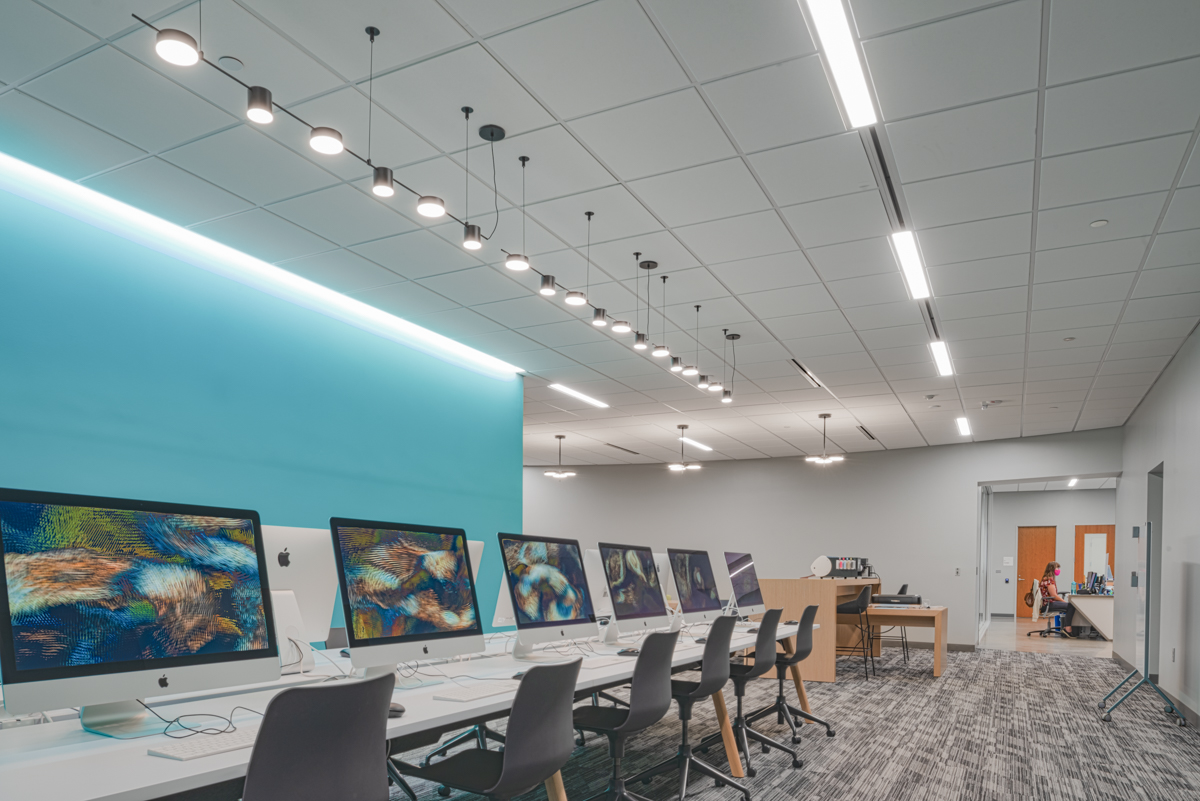 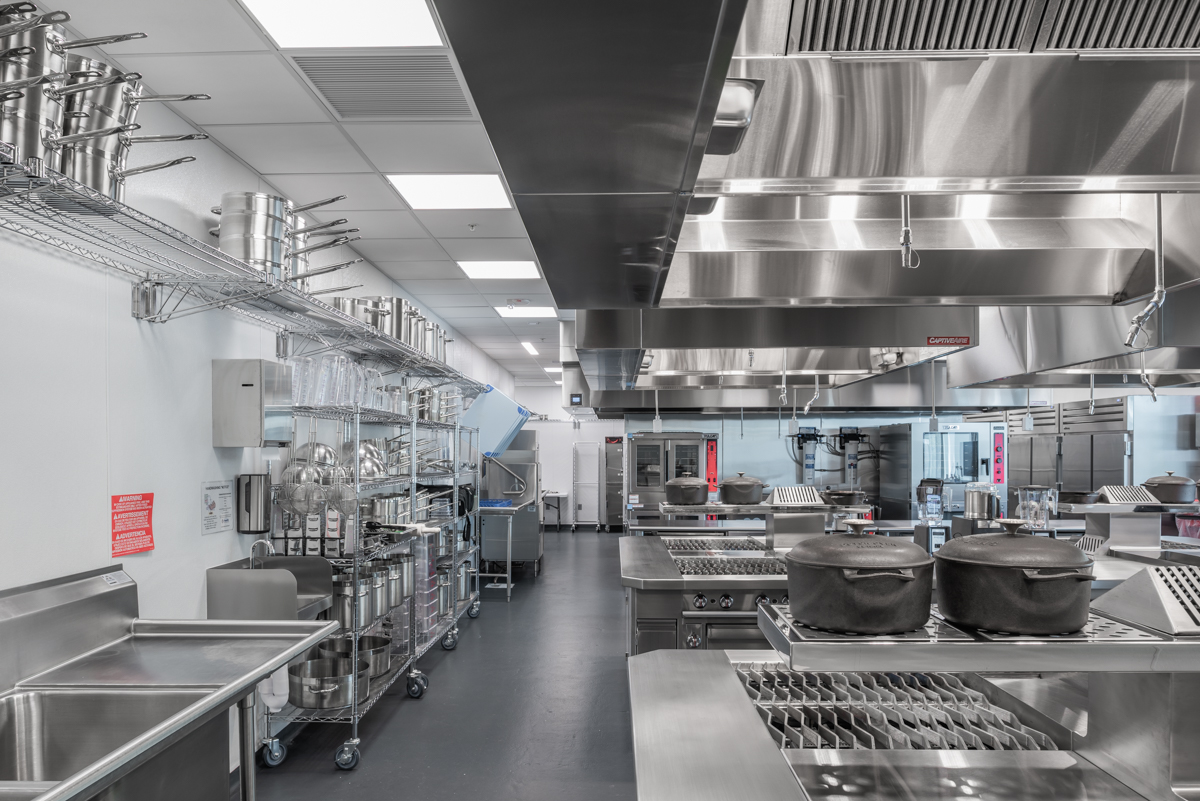 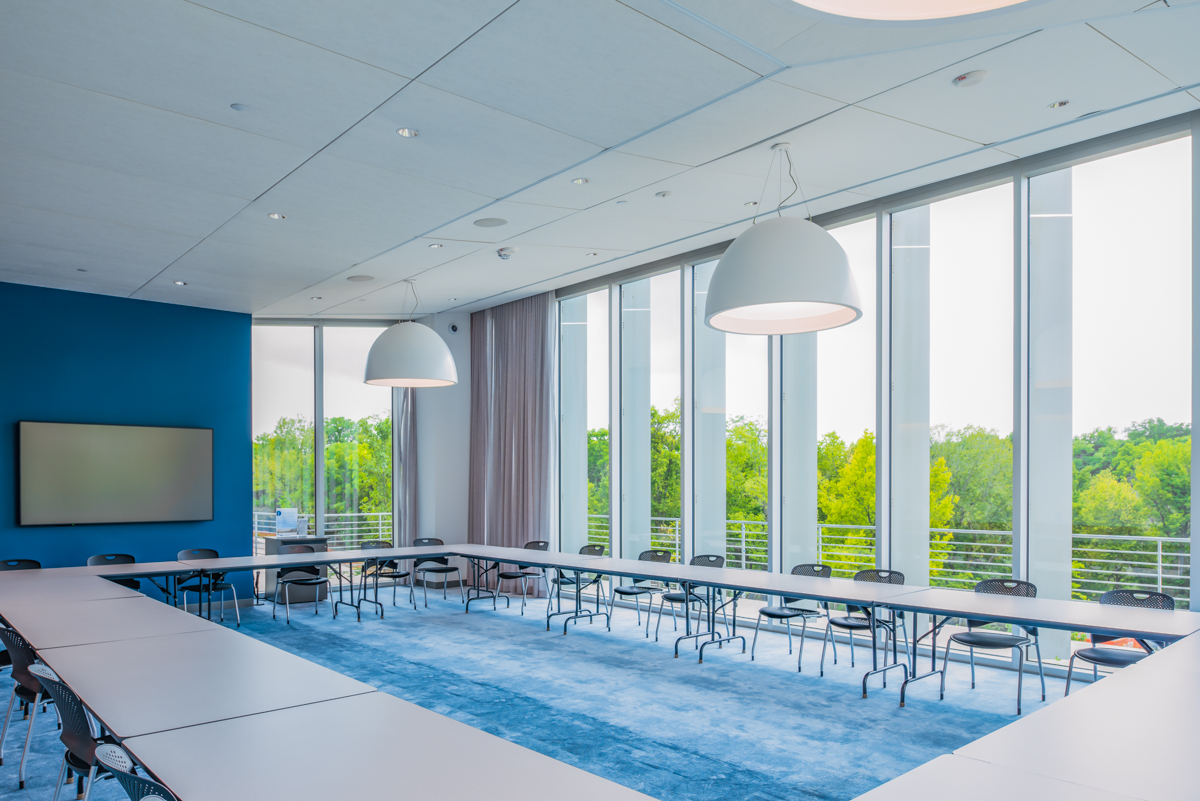 The City of Fayetteville voted in 2016 to expand what was already a pillar in the community. The approval resulted in a $50 million dollar effort to effectively double the size of their existing library building. Through design team exploration of many options, it was determined the addition should extend south on the site, which is characterized with dramatic elevation changes. This allowed the existing building to maintain its stellar views, while also adding scenic viewpoints from the addition. The addition creates many opportunities for patrons to learn and explore via spaces including: a 700-seat theatrical auditorium, teaching kitchen and cafe, professional-grade studios for audio, video and photography production, labs for robotics, virtual reality, and simulators for job training. The City is also working to tie the library’s expansive courtyard to their adjacent hiking trail system.

Mechanical and electrical system within the addition are primarily stand-alone with a few connections to the existing infrastructure. The fire suppression system was treated as a single building and as such has a single sprinkler entrance and shared fire department connection. The existing building’s sprinkler entrance and fire department connection was relocated and reconfigured to back-feed the existing building’s sprinkler zones. A dry sprinkler zone is installed for the basement loading dock.

The library addition is primarily conditioned by a Variable Refrigerant Flow (VRF) system. Fan coils are located above accessible ceilings and in maintenance spaces throughout the facility. The VRF system utilizes 3-pipe heat recovery technology to allow simultaneous heating and cooling in different areas of the building at any time of the year. The system saves energy by transferring heat between thermal zones inside the building when possible, instead of only transferring heat between the building and the outdoors. The auditorium is served by an Air Handling Unit (AHU) separate from the building VRF system as this space has a large, but highly intermittent, load. This AHU performs the primary heating, cooling, and ventilation for the auditorium when it is densely occupied. When unoccupied or under low-load conditions, VRF fan coils serve as the space’s primary HVAC system and the AHU remains off. Supply air is distributed at the ceiling level and returned via low return grilles. Duct silencers are installed on all ductwork connected to the AHU to attenuate sound. The system design in the auditorium is to noise level of NC-20 or less. The HVAC systems for other extremely sound-sensitive spaces, such as the professional-grade sound studio, are outfitted with duct silencers, ultra-low noise diffusers, attenuating duct liner, and spring-isolation ceiling hangers.

The kitchen, café, and associated seating area are conditioned by a dedicated Rooftop Unit (RTU) and several VRF fan coils. To limit odor and heat load transmission to the rest of the library, high velocity diffusers are installed in the ceiling structure above the café. These diffusers project air toward the east wall glazing to create an air barrier between the café and the rest of the library. The kitchen also maintains a negative air pressure compared to the surrounding zones to limit air migration. The kitchen contains ten hoods ducted to rooftop exhaust fans. Make-up air is provided by three Kitchen Make-up Air Units (KMAU) located on the roof. The hoods and KMAUs, which are notoriously energy intensive systems, are outfitted with demand control airflow systems to provide the appropriate amount of exhaust and makeup air for the cooking activity at the time.

Ventilation air for the library addition is supplied via two 100% outdoor air Energy Recovery Ventilators (ERV) located on the roof. These units use a heat exchanger to transfer energy from the building exhaust air to the incoming fresh air. This reduces the compressor power necessary to fully condition the air before it enters the space, saving energy. Fresh air is ducted from the rooftop ERVs to each zone to provide code-required ventilation. Demand Control Ventilation (DCV) is used for each zone via an air valve box. The air valves modulate airflow based on zone CO2 sensors. As more people enter a zone, the CO2 will rise, which will command the air valves to modulate open, introducing more fresh air into the space. This system provides the optimal amount of ventilation for occupant’s activity within the building at all times, while saving energy by not providing ventilation when it is not beneficial to the occupants.

A new 480/277v, 3-phase, 4-wire, underground electrical service was provided to the new addition of the building. A new generator was installed in the parking area, adjacent to the existing genset which could not take on additional electrical load. To satisfy the requirements of the life safety code, transfer devices were provided in the new addition to move light fixtures to generator power and full output upon loss of utility power. Additionally, the new generator provides back-up power to kitchen refrigeration equipment and IT equipment.

Tamper-resistant receptacles for general and specific were installed in all areas of the building and served from the nearest branch panelboard. Floor boxes were installed and utilized to supply power for specific furniture needs.

The existing fire alarm control panel did not have the capacity to handle the new addition, so a new fire alarm control panel was provided. The new panel has voice notification capabilities to meet code requirements. Fire detection and alarm systems were installed completely through the new building. Devices were coordinated to provide a clean look.