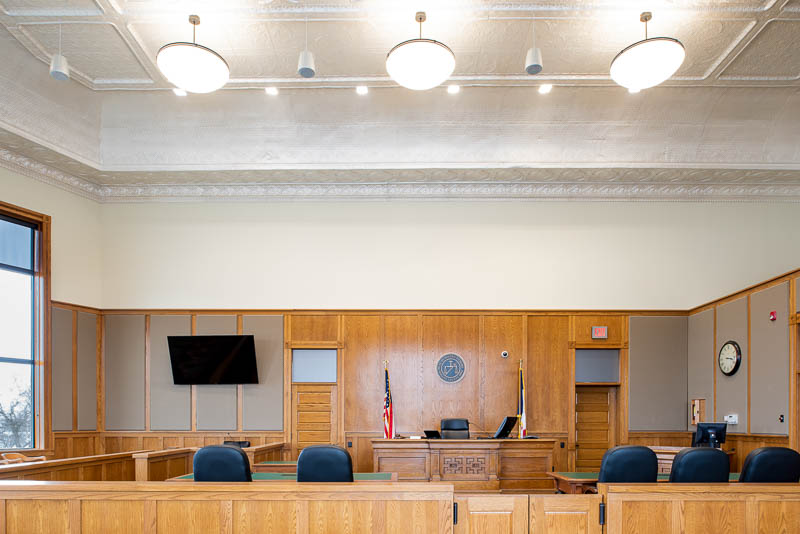 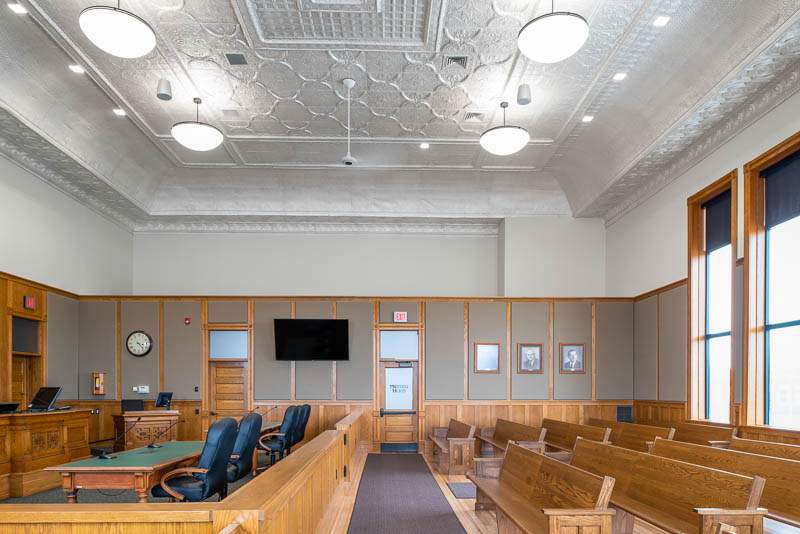 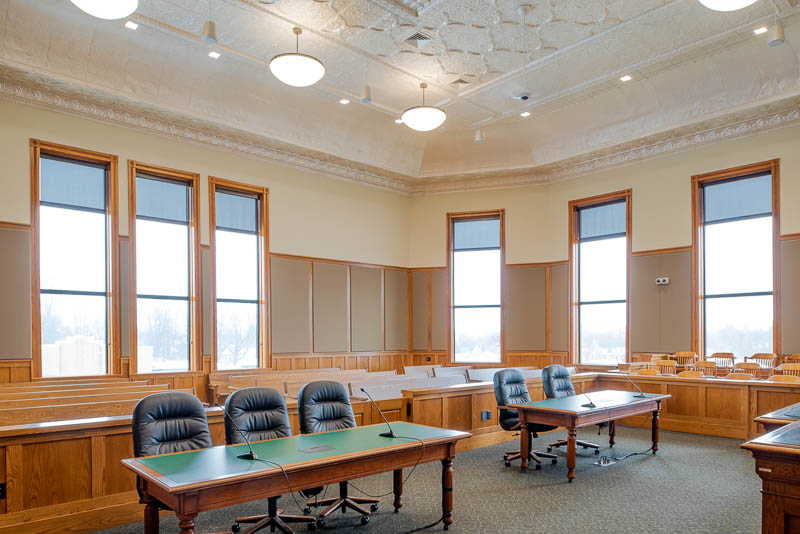 Originally constructed in 1892, Wright County Courthouse serves as the primary judicial resource for the County and is an important alternate venue for high-profile cases transferred from across Iowa. Faced with several security, temperature control, and energy efficiency challenges, along with an increasing caseload, Wright County needed to update their main courtroom, which had not been significantly altered since at least the 1980s.

MODUS assisted the County with evaluating and addressing one of the major concerns from both judicial staff and the public, temperature control. During the winter heating season, three steam radiators heated the space. Non-optimal controls caused the courtroom temperature to vary widely, often far above the desired setpoint, and degraded piping insulation in the floor caused offices on the floor below the courtroom to become extremely uncomfortable whenever the steam heaters were in operation. During the summer cooling season, especially when large crowds would fill the courtroom, the room would become uncomfortably hot and humid. MODUS addressed both these challenges simultaneously by removing the steam radiators and installing a new Single-Zone Variable Air Volume Rooftop Unit. The unit varies the amount of conditioned air delivered to the courtroom, along with multiple stages of cooling, modulating gas heat, and a dehumidification coil, to precisely control the temperature and humidity. A carbon dioxide (CO2) sensor was used to dynamically vary the amount of outdoor ventilation air delivered based on the number of people present in the room. Due to the significant amount of energy required to condition outdoor air, this strategy resulted in substantial energy savings to the county while ensuring occupants were healthy and alert. Two architectural high-volume low-speed destratification fans were utilized to move heat that risen to the ceiling during the winter months back down to floor level, resulting in energy savings and increased occupant comfort.

Security in the existing courtroom was also a major concern to judicial staff. Travel and emergency exit paths, which posed a safety risk should an incident occur, were reevaluated to provide staff a shortened path to a secure location. A defendant waiting room and separate staff and public entrances were also constructed. MODUS designed the new door card-access system to restrict access to certain areas to authorized personnel, replacing an antiquated lock and key system. MODUS also designed several Audio/Visual/Telecommunications systems that are critical for courtroom operation. These systems include a white noise system to protect privileged judge/lawyer conversations at the bench, an audio capture, amplification, and recording system with devices at each of the critical occupant locations, and a dynamic video display system to present information, instructions, or evidence to the court. Infrastructure was also included to facilitate a video conferencing system between the courtroom and county jail that will be installed soon.

Several key architectural upgrades were made to restore the courtroom to its once grand appearance. Two existing acoustic ceilings were removed to restore the room to its original 25 ft height and expose the original ornate tin ceiling. The original ceiling was carefully restored to match its historical appearance, which is unique for an Iowa courtroom. MODUS designed the lighting within the room to both showcase the restored ceiling through illumination with pendant lights and ensure occupants have plentiful task lighting with recessed cans. The design team carefully coordinated all ceiling fixtures and devices as to not distract from the ceiling’s appearance. Several original windows had been infilled with brick for security concerns, which also prevented any natural light from reaching the courtroom. The project removed the brick and opened the windows back up by installing bulletproof glass, which provides the courtroom with both security and daylighting.