Posted at 23:35h in Announcements by MODUS 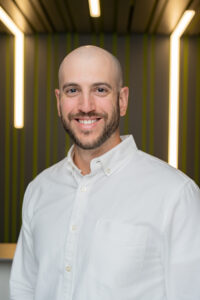 Alex had a dream of becoming an architect and designing world-renowned buildings at the young age of 12. Realizing his love for math and science and a lack of artistic vision, he pursued engineering, graduating with a Bachelor of Science in Mechanical Engineering from Iowa State University in 2011. Alex worked for MODUS during his senior year of college before officially joining the team in the Waterloo office immediately after graduation.

Alex has always desired to work for a company where your contributions have a direct impact on the business, clients, and community. He enjoys the custom nature of engineering consulting. No two buildings are the same and present ever-changing challenges on each project. Alex is passionate about creating sustainable designs that will improve the future environment for generations to come.

Outside of the office, you’ll find Alex enjoys spending time with his wife, Liz, and daughter, Emilia, snowboarding, and playing hockey. He has a newfound interest in golf and hopes to one day give Jake a run for his money. 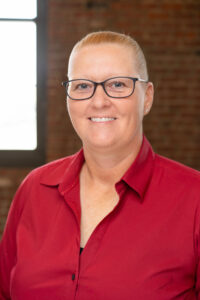 Holly grew up in Southeast Iowa where she learned her work ethic and problem solving skills working on the family farm. Those skills helped her succeed as a 2-sport athlete while earning her Mathematics degree from Simpson College. Holly eventually found her way to the HVAC Industry as a Drafter at a local Architecture Engineering Firm in Des Moines where she was encouraged to start her next challenge to become a Mechanical Engineer. She enrolled at Iowa State University in 2002 while working full-time and graduated four-years later. Holly joined the MODUS family in 2008 where she immediately felt at home. She was part of a team solving unique project challenges and training young engineers to succeed in the HVAC consulting world.

Holly has become a vital part of the leadership team through successful day to day staff development, project oversight, and office management.

Holly’s free time is spent outdoors playing catch and shooting hoops in the backyard with her two boys and golfing with her wife.